Last week my SIL and I took the boys to the local Children's Museum. It was incredible and I'll show you some more pictures in a separate post. Today though, I wanted to share these pictures for two reasons: one, I think they are hilarious - the boy at the cash register has a face for TV, and two, it is a topic that has been coming up a lot for my friends and me lately - conflict resolution between preschoolers.

So here's the background to go with the pictures. Will was playing in the supermarket area of the museum; he gathered groceries and made his way to the checkout. As his items were being scanned the question of a price check popped up. I kid you not! The two boys were in complete disagreement on the price of the orange juice. No yelling, no pushing, just firm discussion. 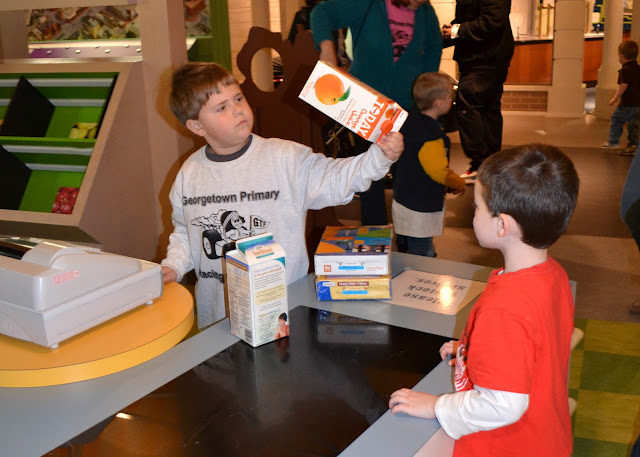 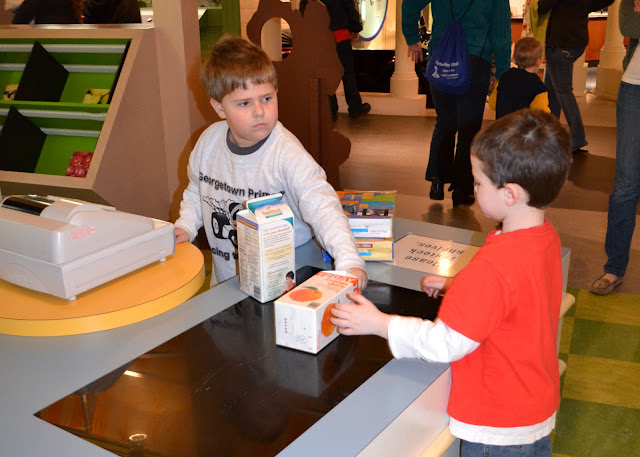 I was two steps away and decided to let it play out a bit, but before I could take a second breath another woman (I'm assuming his mom) swooped in, hovered and fluttered and shooed both boys in different directions and then gave me a disapproving look! Am I wrong that it bugged me? Obviously if there was  some yelling or swinging taking place I would have jumped in but they were working it out! Maybe I'm just super sensitive about this but lately it seems that everywhere I go moms are jumping in before giving their kids a chance to work out their differences - not even attempting to modeling it to them.

I don't know where I'm going with this. I just thought the pictures were funny and I think our kids should be taught at an early age how to work disagreements out between each other. That's really it. If you want to read a much more well written and hilarious post you should check out Durango Mom. Enjoy your Tuesday! I'll be referring two little men on this drizzly day!
Posted by ~ko at 7:16 AM