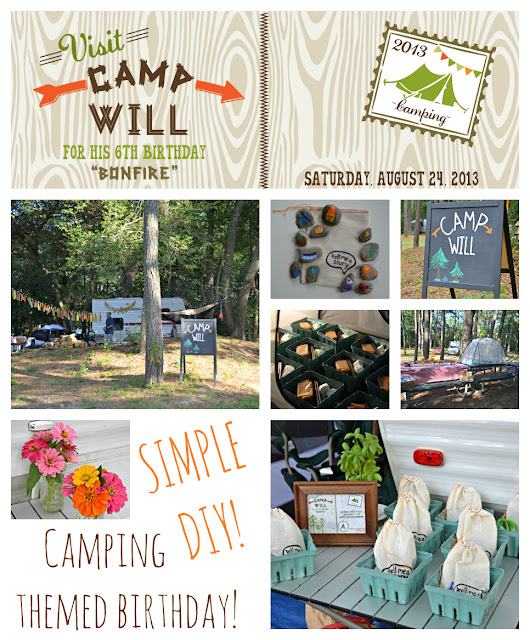 How in the world do I have a six year old?

It still baffles me,
except when I look in the mirror and I see the wrinkles around my eyes ;)
Yep, I must have a six year old
and a funny one at that!
This kid is such a hoot; he has his dad's sense of humor
and I love watching his brain work.

When he requested a camping birthday party,
actually a bonfire/camping party to be exact,
Mr. Doozie and I were
more than happy to oblige.

We wanted to do it on a budget
but still feel like we gave it our all.

The end result was just what I was hoping for
but more importantly it was exactly what our
little guy dreamed of!

Enjoy your visit at Camp Will! 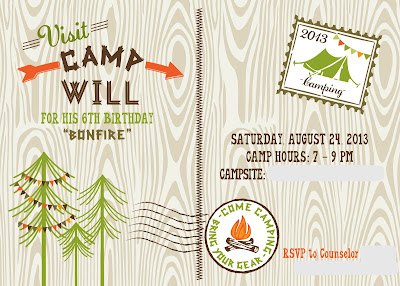 I ordered the invites off of Etsy
from AR Party Printables.
They were super quick with getting the file to me
and I simply printed them out at our local office supply store. 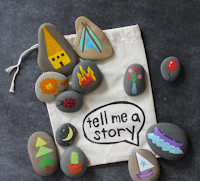 But goodness I loved them!
I had found them ages ago and couldn't stop thinking about them.
I loved how they brought child and parent together
and encouraged creativity and story telling.
I really really wanted them!

So the DIY'er in me got busy scheming.
First stop was a trip a rock yard for landscaping contractors.
They thought I was nuts but let me take all the rocks I needed
and only charged me $10 dollars!
Score!

I used acrylic paints that I had on hand and sealed them with some leftover Mod Podge
Found the little bags on Amazon for cheap
like $12 cheap!

And I was well on my way to making some awesome party favors! 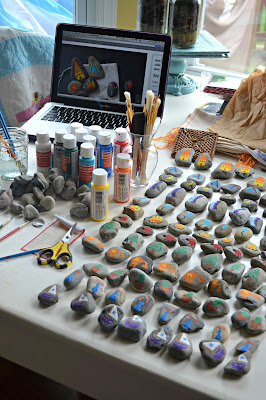 After an entire week of painting
I ended up with this! 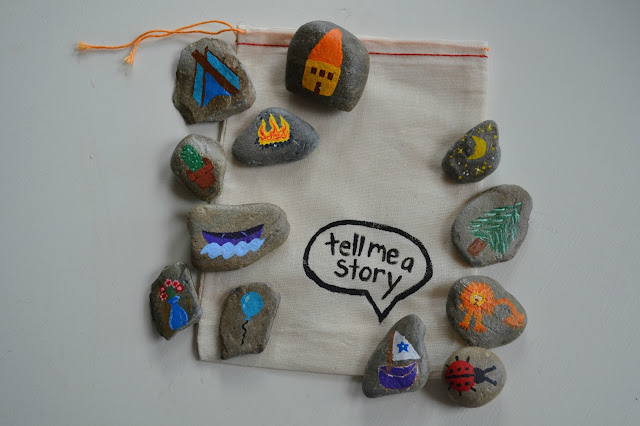 Pleased as punch!
For a little over 20 bucks I was able to make all 8 party favors!
Woot Woot!
On a side note I will say, the price for the ones listed on Etsy is spot on.
Really. Spot on.
One row of boats in and I knew it.
If I was Tori Spelling or some other famous mom that goes all out for their kid's birthday parties,
I would have just added those puppies to my shopping cart
and called it done!

Plus I found that I really like to paint (and I use that term loosely),
Mr. Doozie would come home from work and I would squeal with
delight, "come look at my cute cacti!!"
He was always so kind to me,
"yeah, honey, I love that shading around the pots"
Haha
He is such a good husband! 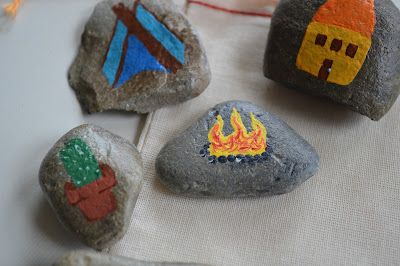 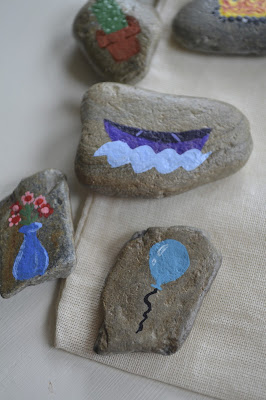 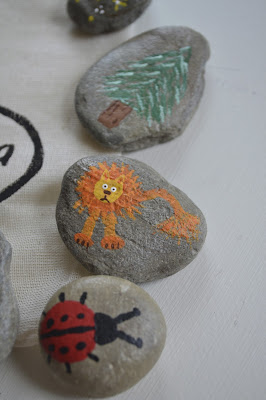 We set up camp the day prior to the party.
Thanks to my parents we were able to borrow extra camp gear,
making my job as hostess so much easier!

Will's one request was that he really wanted to sleep in a camper!
Ha!
So we rented one for cheap through the local base here.
Thankfully is was squeaky clean.
I wont lie I was envisioning bedbugs and all sorts of grossness.
But is was super clean, actually very cute and hallelujah we could pull it behind the minivan.

God Bless, my sweet husband;
the only guy in the whole camping area that rolled up with a camper that was being towed by a minivan ;) 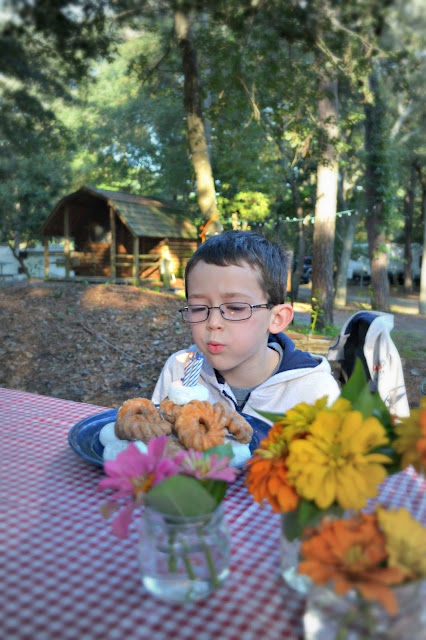 The morning of his party we celebrated his birthday with just our little family and a doughnut tower.
Then we jumped right into to party set up. 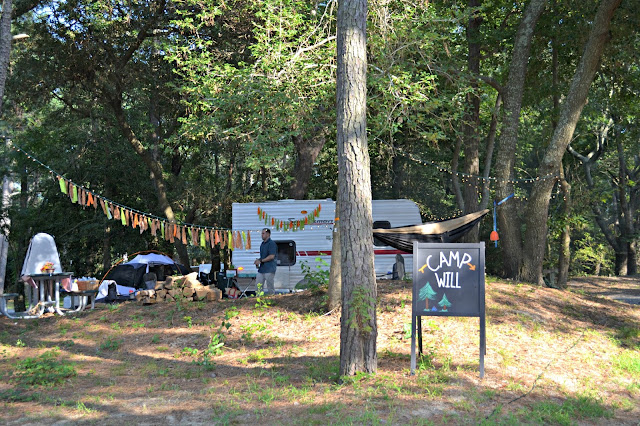 Twinkle lights and scrap fabric bunting,
the official chalk board camp sign,
and we were pretty much done!
The destination itself was really all the decorating we needed. 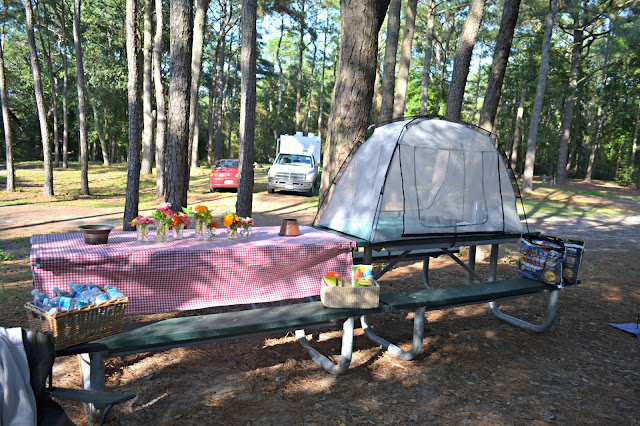 The food tent was the find of the season for us!
It's huge and could fit all the food we served.
Once again handy-dandy Amazon!
We used baskets to keep water bottles within reach
and another as a bug spray station. 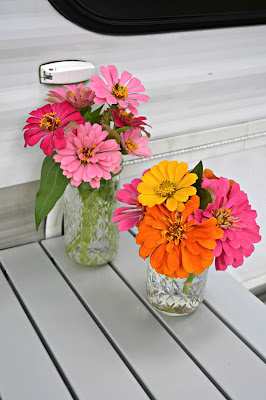 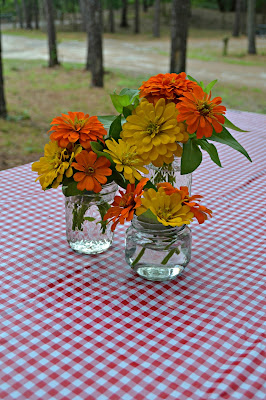 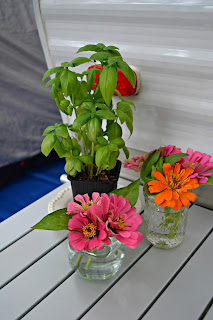 Yes, I brought flowers from home and my beloved little basil plant.
After all we weren't just camping, we were throwing a party! 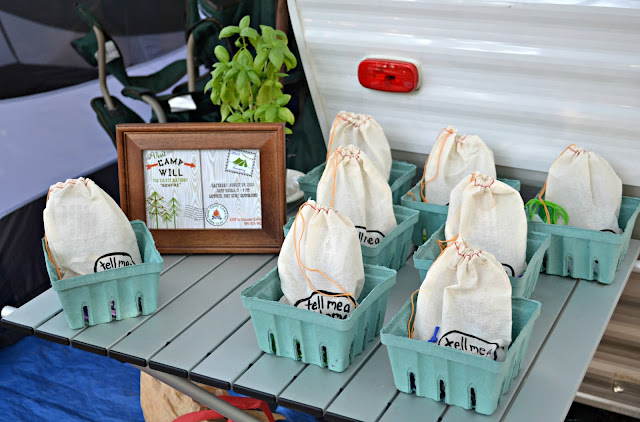 Each child in attendance took home a berry basket with the Story Rocks, a flashlight and toy compass.
You can order berry baskets off of Amazon as well,
but we live near a lot of farms so I just stopped by a farm stand and asked for a dozen and they said yes! 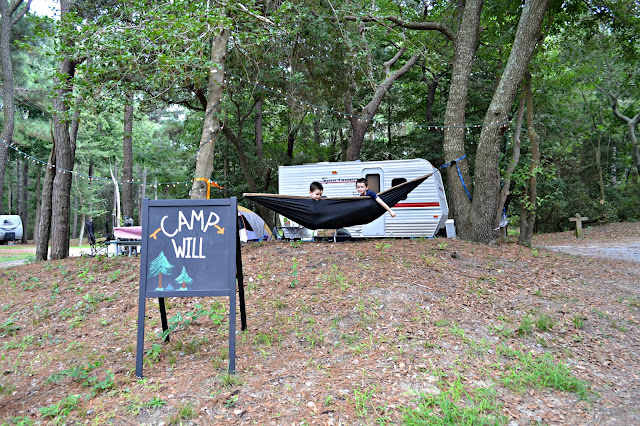 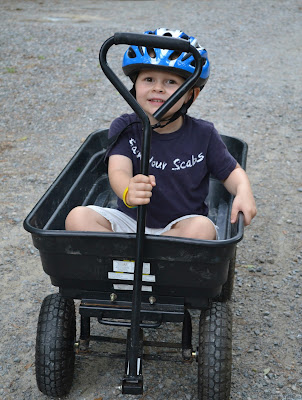 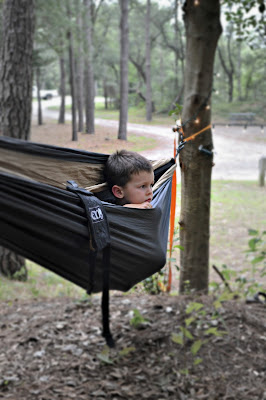 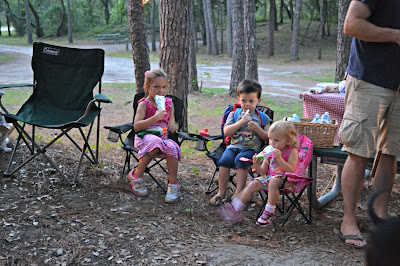 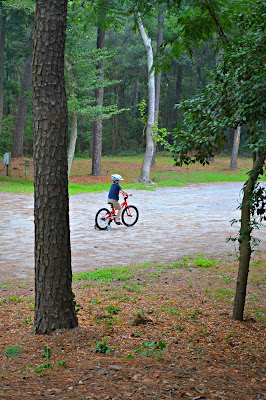 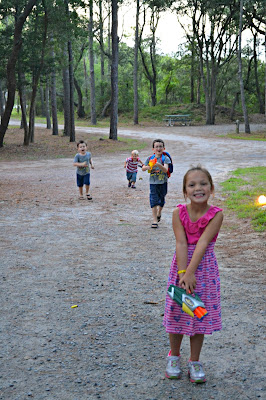 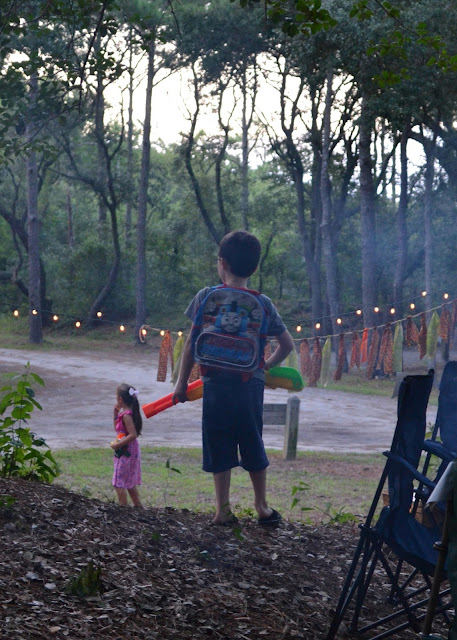 I planned zero games!
Which is so unlike me, but we let the woods and their imaginations take charge.
Everything from spy games, to cowboy roundups,
you name it they came up with it!
The result was entertained kids and parents visiting fireside!
It was perfection! 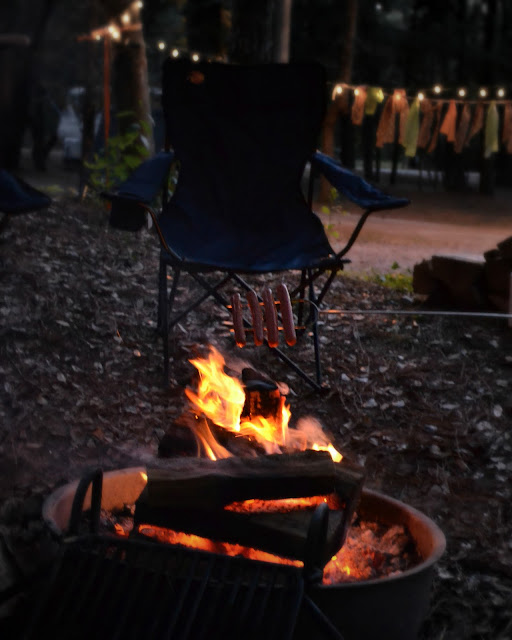 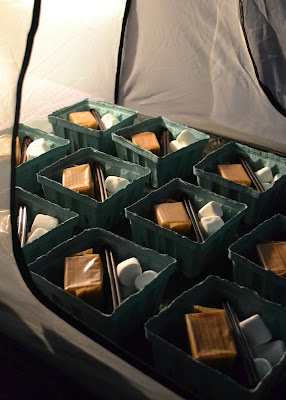 Since the party was after dinner and really only for a bonfire,
we skipped the whole cake scene and just offered s'mores.
In berry baskets of course! (thank you Pinterest) 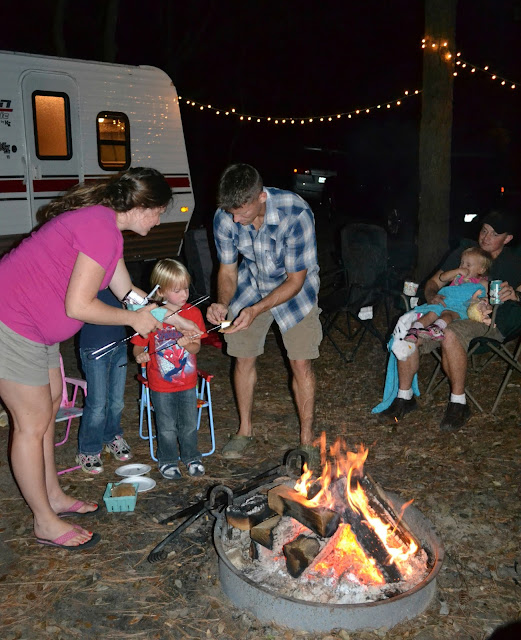 We were so blessed by our friends that were able to come!
I knew it was a lot to ask, a late night destination party for young kids.
It was a crazy request,
especially with one momma being a few days over due and another
with two kids under 2.
But everyone jumped on the bandwagon!
In fact a few of the families even decided to camp over!
The birthday boy really could not have had a sweeter party,
and our entire family felt so loved. 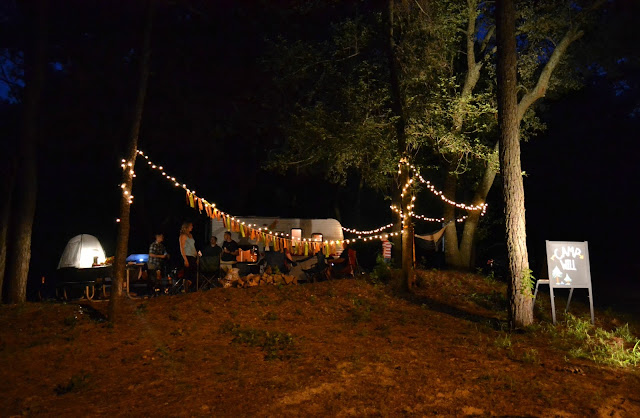 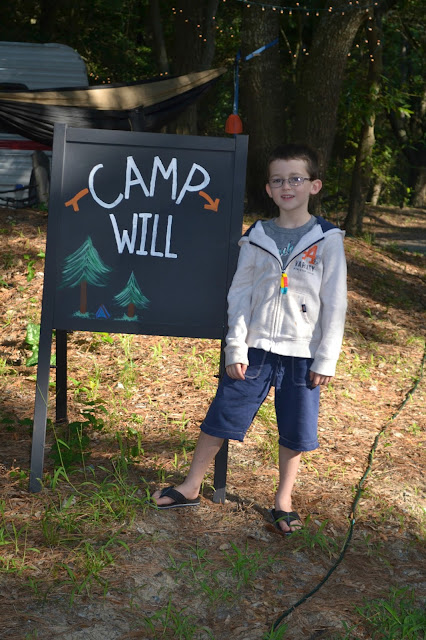 Thanks for visiting Camp Will!
xxoo
Posted by ~ko at 6:00 AM