Hey hey! I'm finally emerging from the land of Legos, curling ribbon, balloons, party favors and food dye! Amazingly enough I survived and was able to pull off a Lego themed birthday party for Mr. Will that sent him over the moon. Most of the ideas I pulled from Pintrest and since it was hard to say who had the original ideas I'm not linking anything but the main search pages. All I will say is if  you want to throw a party, search your theme on their site and you'll have everything you need. 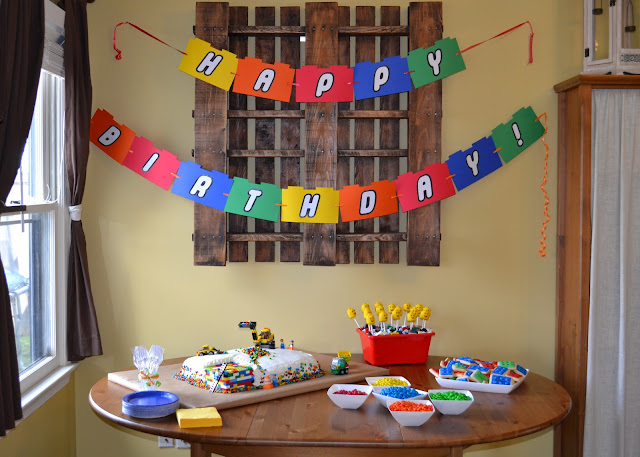 This was the sweets table. I thought it turned out simple but cute. Our house is so tiny that I really didn't want to go too big. The birthday banner is supposed to look like Lego bricks. Bill found the font online and I cut out colored construction paper in the shape of Legos; it was so easy! 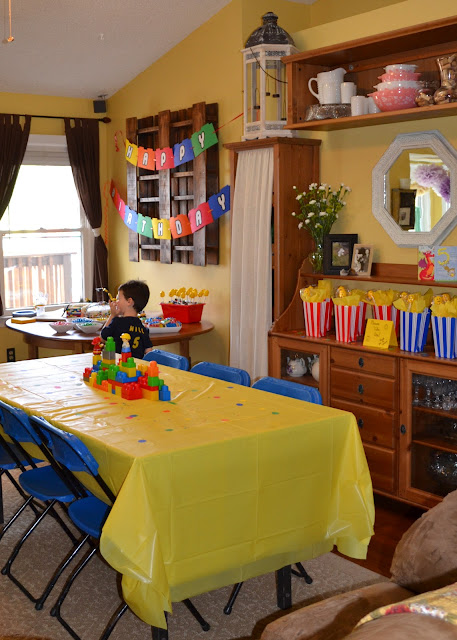 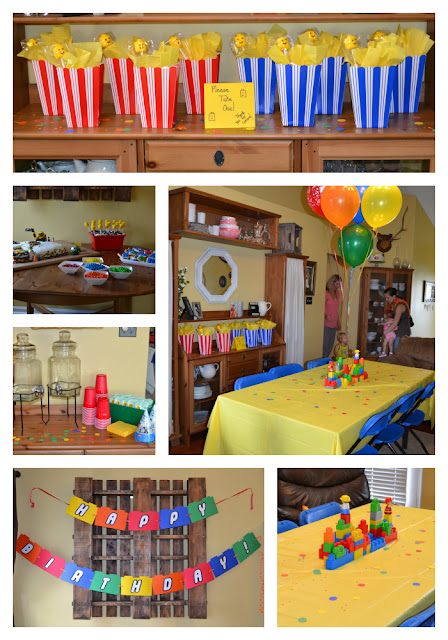 For the party favors I found the bags at Party City and we filled them with Lego crayons (etsy), a party blower, Lego stickers, a plastic ball maze and one Lego Man Pop (pintrest). They were a huge hit! Will and my mom helped make the confetti earlier in the week by hole-punching the scraps left over from the banner. We used Will's baby Legos as centerpieces and balloon weights. I was so glad I didn't donate those in the last toy purge! Yay for free decorations :) 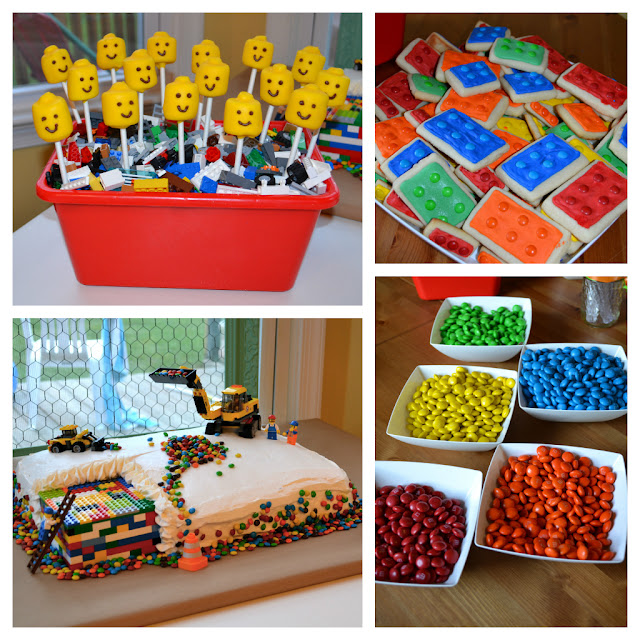 The Lego Man Pops are made out of marshmallows dipped in chocolate, the Lego cookies were made from rolled sugar cookie dough and I used mini m&m's to make them look 3D. The cake was a happy accident. If you follow me on Instagram you already saw that I dropped the second layer of the cake while trying to move it.....I nearly had a mini breakdown. But we made it work :) I was so thankful to have my Mom in town, she was a huge help all week and then when this happened she came right along side of me with loads of encouragement and the cake ended up being the show-stopper for the party :) On a side note, don't get grossed out, when I dropped the cake it landed on the cooling rack and never came in contact with the floor. Promise :)

My only original idea :) Lego Man shirts! It's amazing what a little fabric and some puffy paint will do. Will says he wants to wear his on the first day of kindergarten and as you can see Jack thought his rocked too! 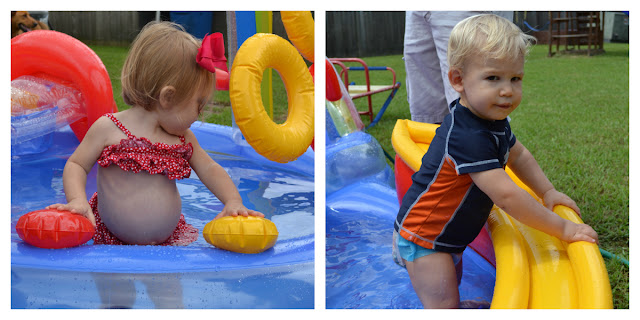 About half of our guest list was unable to make it, but it was a blessing in disguise. With all the rain that morning and the muddy mess that occurred in the backyard, fewer people worked out for the better. Our house was full but people were able to move around with ease. 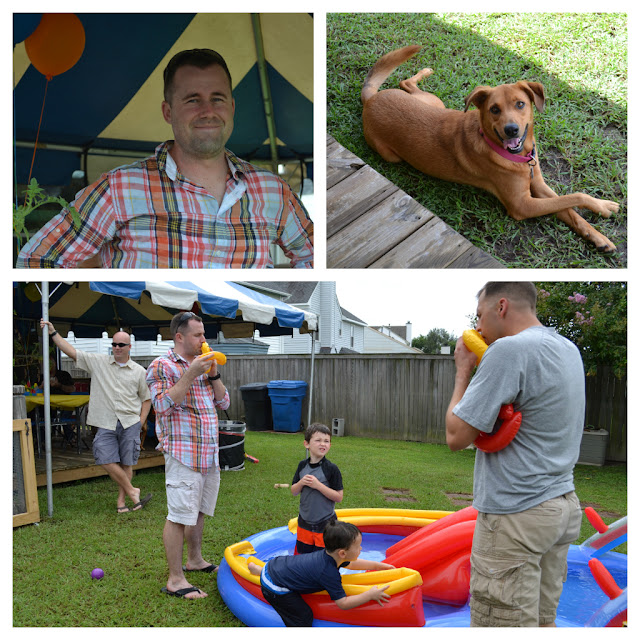 Mr. Doozie worked sooooooo hard to get everything set up for me. Bless this man, he worked in the pouring rain to get that tent up on the deck so that people could visit outside, not to mention blowing up the water slide and pool last minute when the sun decided to peek out! Later this week I'll show you the incredible gift he built for Will (and Jack); it deserves it's own post. 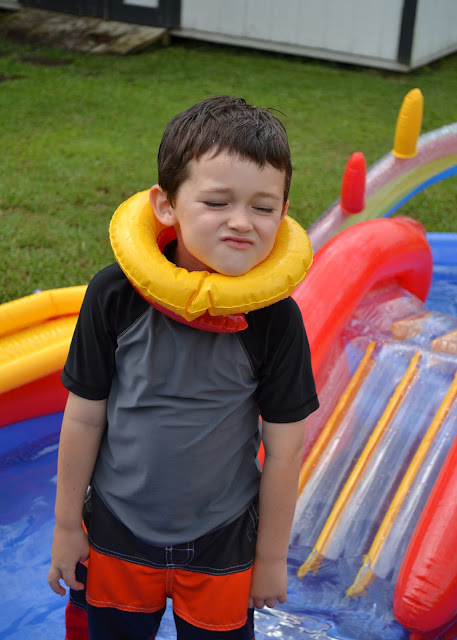 The birthday boy.....Pray for his teacher when you think of her!

This water-slide continues to be one of the BEST gifts ever! 3 years later and it is still working and the kids are still thrilled with it! Thank you Memere and Grandpa! 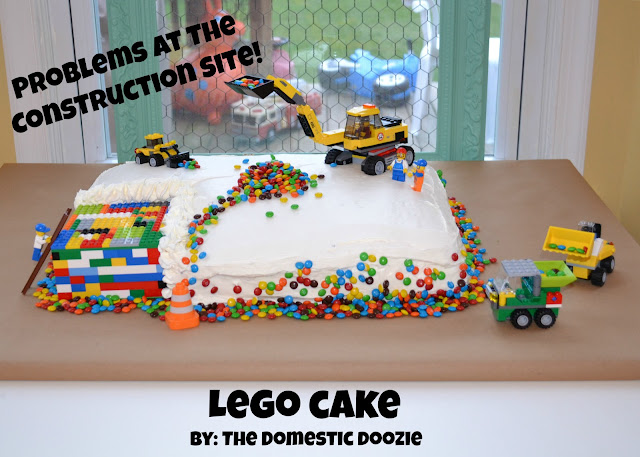 Oh the cake! Mini M&Ms, a ton of icing and lots of Legos saved the day on this one! Whew!

Jack may have blown out the candle the first go around but Will was so kind about it :) I love this little guy oh so much! 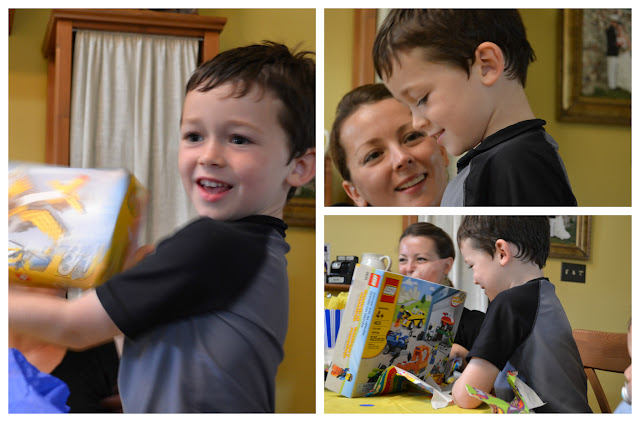 Yes, we are flooded with Legos; I'm finding them EVERYWHERE!!! But that is exactly what our little man hoped for and I am so thankful to all the friends and family who made that wish come true. Y'all are AMAZING!

So there you have it! A homespun Lego party. It wasn't perfect but when I asked Will how it was, he said, "Awesome Mom!"!! Excuse me while I go high-five myself ;)

A huge thanks to Mr Doozie and Mimi for the man-hours that went in the week before!