Oh y'all... it has been an odd 24 hours for me. I had planned on posting a recipe today for adorable mason jar cakes but instead I went to bed last night emotionally tired and with a heavy heart. Let me share with you what happened, how God moved me and how I'm feeling today. 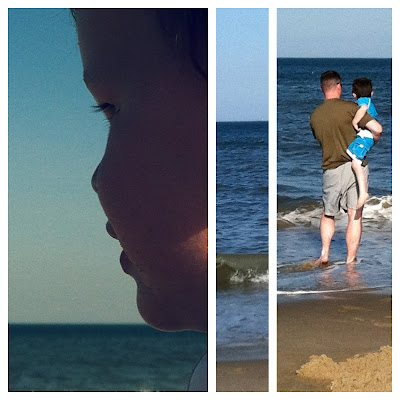 This is how we spent our afternoon. Bill met us at the beach for a little family time. It was simple and sweet, just soaking up my boys, the sun and the surf. Bill needed to get home for his men's group so I chose to stay behind with the boys and walk home. How lovely it is to live so close to the beach. I sat for a little longer watching them run up and down the shoreline, whooping and hollering, the joy on in their hearts just spilling out.

By the time we left, the parking lot was nearly empty and I sat the boys on a picnic table to de-sand them. It's quite the process.

What happened next was such a blur and the adrenaline and emotions that over took me is something I will remember for the rest of my life. All the sudden we heard a woman yelling. I'm not talking a little upset, I'm talking ANGERY. I have never heard so much anger in a voice before. It shook me to my core. I looked up to what was going on and saw two kids being berated over what sounded like a lost flip-flop. My stomach turned, I could tell something wasn't right. As I stood up to see if I could help, her son turned back to the boardwalk and the mother hit him as hard as she could in the back of the skull causing him to collapse to the ground. Y'all....I'm in tears as I write this out. More occurred that I won't bother to imprint in your minds, I don't even want to acknowledge it in written form.

With every fiber of my body I wanted to scoop those children up, put myself between them and the woman but God told me to be still. And I have to trust Him that it was for my own safety and that of my children. She had forced the kids back on the beach to look for the sandal and that is when I knew that if I did not do something about what I had seen I would be failing God in so many ways.

Thankfully I had my phone on me and was able to take pictures of the car she was loading and reported to the police what I saw immediately. I left the beach feeling so shaken up, saddened that my children had to witness such abuse by what they view as a protective figure, and sickened for the little boy and his sister.

As I was giving my statement, several calls were coming through the radio and the officer told me that they were able to get there before she left and that apparently one of the children had injuries significant enough to call in "other services".

Sigh....what if I had quickly walked away, shook my head and tried to push the scene out of my mind?

I have to say that yesterday I really felt like I was moving at God's pace, I had slowed down and focused my entire day on the care and nurture of my family. We are never at the beach that late, but now I see how my entire day was orchestrated to be at that picnic table at that exact time. Honestly most of my days are fast paced, full, hurried, scattered. As I sat on the couch last night thinking about everything that had taken place. I was at a loss for words.

I dont want this to be a "yay me" post in anyway. I'm hoping by sharing this that we can all be reminded to slow down, be observant, stay "tuned-in" to our surroundings and when we see something that is not right that we act. I know I've turned my head the other way many times. In this world we live in that shouldn't be the choice I make. Bill shared this scripture with me from his men's group that day and I thought I would pass it along.

Faith in Action (The Message)
James Chapter 2:14-17
Dear friends, do you think you'll get anywhere in this if you learn all the right words but never do anything? Does merely talking about faith indicate that a person really has it? For instance, you come upon an old friend dressed in rags and half-starved and say, "Good morning, friend! Be clothed in Christ! Be filled with the Holy Spirit!" and walk off without providing so much as a coat or a cup of soup—where does that get you? Isn't it obvious that God-talk without God-acts is outrageous nonsense?

Pray for those children and for the woman I'm assuming was their mother. I'm sure there are many hurting hearts today.
Posted by ~ko at 9:35 PM